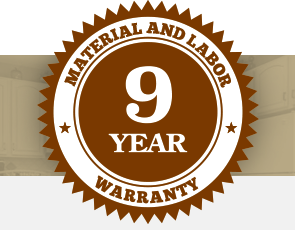 Bill Carlson is a second-generation painter. He grew up working with his father’s painting and restoration company. After graduating from Bennington High School, he served in the US Navy, traveling with the boxing team. While this was a great opportunity to see the world, it also made him realize how much he loved his own little world here in Nebraska. He settled back into the painting industry, working with his brother. It wasn’t long before Bill’s entrepreneurial spirit pushed him to start his own business. Always one for a challenge, he longed to prove to himself that he could be as successful on his own as both his dad and brother were.

What began in 1996, as a small team working primarily with property management companies, grew to 8-10 employees painting for builders in the new construction field. The quality of work provided allowed Brush & Roll Painting to be involved in a lot of the high-end homes being built in and around Omaha.  As the market began to see changes, so did the focus of Brush & Roll Painting. Many builders went bankrupt, and that meant a large number of money owed was never going to be recovered. It was very important to Bill that his staff be as minimally affected as possible. He knew if it came down to it, he could put on the “painter whites” and do enough work to keep his family afloat. He also knew that his employees had families too, and the last thing he wanted to do was have to lay them off during this “economic crisis.”  Times were financially tough, but he was determined to make it through.

It was time to set Brush & Roll Painting apart from the competition. Hiring on integrity, creating a team atmosphere, and continual training are just some of the ways we accomplish that. Another way was to research and test the best process for refinishing cabinets. Bill wanted something that could withstand the day to day wear and tear, not just painting over a finish, but giving a furniture-like finish that could stand the test of time.

On a Personal Level

Bill and Tia were married in the fall of 2005. Tia came as a package deal, with her son Jaydon, who was five at the time. Tia’s still not 100% sure who Bill fell in love with first, but since she knows first-hand how amazing Jaydon is, she doesn’t really mind! Jumping into the role of husband and father, while balancing a growing business presented its own new set of challenges. (This is the time when Bill really started to learn the importance of communication – at home AND with his customers!)

Fifteen years later, and their family has grown. Two more sons, 2 daughters, a dog, and 2 kittens. Life keeps them busy with school, sports and activities. They enjoy and cherish their time with family, and feel it is important for their employees to do the same.

Brush & Roll Painting wants to set the standard for painters and refinishers in and around the Omaha area. Providing good, quality work with outstanding customer service will always be our priority.